Competing Together While We’re Apart

For most of us our season came to an abrupt end this season after weeks or months of training. Pools across the country were closed and competitions, including State Meets and USMS Nationals, were cancelled leaving swimmers wondering what to do? Although many may compete in triathlons and also bike and run, for a large percentage of us swimming is our only fitness outlet. The loss of our daily chlorine fix is a gap in our life. We miss the endorphins of exercise but what we also miss is the connections: our lane mates that support us through the harder sets, the coaches on deck that ask us how we are doing each day, teammates in the locker room before practice, going out as a group for coffee afterwards. So, with social distancing and the lack of pools and open water swimming in most parts of the country how do we fill that gap? How do we connect and also have a little fun and competition at the same time?

My Masters team, MAC (Milford Athletic Club) has a strong history of competition at the Michigan Masters State Meet. We have won for the past seven years and were really looking forward to defending our title this upcoming weekend. The amazing part about our team is that it is composed of about sixty percent of swimmers that had never swam competitively before. They are the heart and soul of our team. They are the ones that swim the 200 Fly and 400 IM and the average age of this group is probably sixty years old. They came to the pool years ago thinking “I just want to swim a few laps” and somehow got sucked into the MAC philosophy that “everyone swims everything”. Not by the coaches, but by their teammates, who tell them that “I did it, you can do it too”.

All of these MAC Swimmers are now the ones that are at home right now, staying away to keep others safe. We’ve been connecting via Facebook, e-mail and phone calls. We’ve been keeping each other motivated with funny memes, videos, and encouraging each other to get out and try new things. But as our State Meet weekend approached we all knew that we should have been together all weekend and we were feeling the loss. So the Wednesday afternoon before the meet, one of MAC coaches came up with a crazy idea….what about a virtual State Meet? Sign up online, points for activity, connecting with each other, funny videos, and videos. Competition would take place during the same time our meet would have taken place so even though we can’t be together we can connect and compete.

If competition were to start at 3pm on Friday, we had a lot of work to do. Face time calls, multiple texts, e-mails, and phone calls went back and forth. We wanted people to not only get out and be active but also share their activities, get their friends and family involved and connect with other teammates as well. We created a Google Doc to put on our team website for people to sign up. All activities were assigned a score and you could do them multiple times during the weekend. We did an e-mail blast to the team to let them know about it and got ready to go live on Thursday night hoping for at least twenty people to make the competition fun.

When the sign-up closed at noon on Friday, three of us got together on a Face Time call to divide the registrations into two equal groups. Because it was an online document we could see other people also online watching the ‘draft’ as we separated the groups into the Blue and Green teams! We separated the teams by age or ability knowing that some of our swimmers spend a lot of time running, biking, or at the gym. We also have some over-achievers so we made sure that those were divided equally across the two teams! In less than twenty-four hours to sign-up for the event, we had two teams of twenty-eight people which exceeded our expectations. Our youngest participant was 19 and our oldest was 76. We had some spouses that were non-swimmers and some friends that decided to join in as well.

We kicked off the event on Friday with a Live feed on Facebook. One of the coaches took a stroll around the neighborhood in her parka and suit and dipped her toes in her chilly Michigan lake while responding to all the comments. Numerous people jumped in to say hello, comment and talk a little smack. Others were already on the bike or out for a run scoring points for their team. As you finished each activity, you entered it onto the Google Doc and it automatically updated your point total and the team total. We were off to a great start!

Throughout the weekend the score between Blue and Green went back and forth. We posted the team scores on Facebook regularly just like they announce at our State Meet. Posts on our team Facebook page were almost impossible to keep up with. If you were not actively scoring points for your team you were trying to keep up with the photos, videos, and comments from everyone. In addition to points for activity, you got points for taking a picture doing that activity. You got more points for taking picture or making a swim video and since we have no pools or lakes available in Michigan right now there were some incredibly creative ones! Someone suggested a Zoom cocktail hour on Saturday night so we set that up, sent an e-mail blast out, posted on Facebook and enjoyed a cocktail and recapped the day with our teammates or rivals.

As Sunday’s 5pm deadline approached, the teams were less than 200 points apart. People were either out scoring last minute points or if they had done their workout in the morning, they were stalking the Google Doc to keep track of the score. At 5pm, we closed access to the document and announced the winners – the Blue team had won! Over the course of the weekend the Green team had scored 3440 and Blue 3555 so a difference of only 115 points made for a very exciting meet! 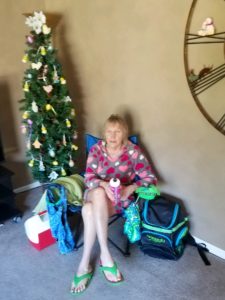 As a coach over the weekend, I felt like I spent the weekend at on deck except for the fact that my feet didn’t hurt from standing! My body ached from pushing myself and my brain was a little foggy from all the organization. The best part to me was that it truly felt like a team atmosphere. Even though we weren’t all together all weekend we participated in something with each other. We cheered each other on, we encouraged each other, we laughed out loud at each other, talked a little smack, and brightened each other’s weekend. The biggest measure of success to all of us, however, was the number of times people asked “Can we do this again next weekend”?

We wanted to share our idea with others across the nation that may be feeling the same loss of their teammates and competition and invite you to do the same thing. We’re sharing with you our example so that you can take it and build on it. Invite your friends and family, connect, compete, and stay healthy. We’ll see you in the pool soon but now we’re busy getting ready for our next event!